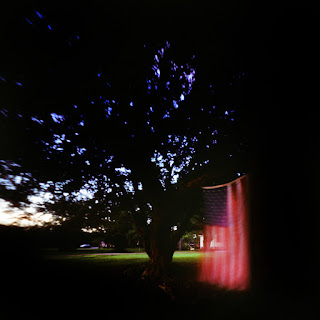 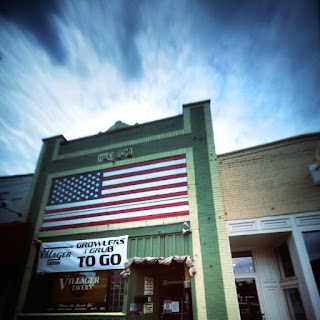 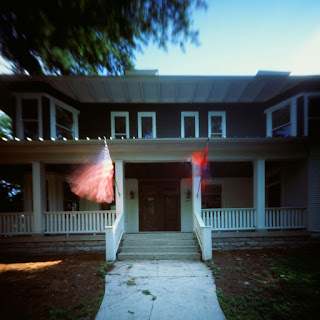 There's a coffee shop in San Francisco called Pinhole Coffee (www.pinholecoffee.com). I've never been but based on info from pinhole friends of mine, and the name, it's a magical place. About a week ago Jeff McConnell, a pinholer based near NYC, suggested folks support Pinhole Coffee during the Covid-19 crisis by making a purchase from their online store. Wanting the magic to survive, I bought a few things. My good arrived few days later, just in time for Worldwide Pinhole Photography Day 2020, so I decided to turn the ceramic Flat White Pinhole Coffee Cup into an anamorphic pinhole camera.

The pinhole-ish looking logo from a Vinyl Me, Please shipping box (I joined VMP in the middle of the night early in the Covid shut down...anxiety shopping I don't regret) was a perfect fit for the top of the cup. I created the pinhole using a sewing needle and heavy aluminum foil. I checked the pinhole for roundness using my phone camera (not sure this actually works...but it looked round in the picture, so I'll pretend it does until proven otherwise). Next I cut a test strip of film to determine sizing inside the cup and figure out how to attach the film to keep it from moving around. The solution = lots of tape.

With a plan in place, I went into my darkroom (bathroom tub, shower curtain closed, towels stuffed into the gap under the bathroom door, fingers crossed the light still seeping in around the door frame doesn't ruin the film) to cut the film, arrange it in the cup, and tape the pinhole cover on top. The process took about 15 minutes. The tape and pinhole cover took a walk in the dark for a bit requiring me to hunt around unsuccessfully until finally I shoved the open end of the cup against my chest and turned on the light to find them. They were literally between my feet, the one place I didn't check.

Pinhole Day in Nashville was cold and rainy. I looked around the house for inspiration and decided on a bourbon shot...four favored bottles specifically: Eliza Craig Small Batch, Hudson Baby Bourbon, Larceny, and, my favorite, George Dickel Bottled in Bond.

The film was exposed for about 10 seconds (total guess since I didn't know the pinhole size, and, depending on which part of the film we're talking about, focal length could be anywhere between 20 mm and 70 mm).

The final image ended up as confusing as any other anamorpic pinhole, screwing with perspective, requiring viewers to figure out how to piece the image together. There are a couple places where the tape is outlined.

It's an interesting enough picture and I enjoyed making it (perfect for a Pinhole Day project), but I doubt I'll go through the process again; too much work with too much uncertainty. Instead, I'll stick to drinking coffee (or bourbon) out of my Pinhole Coffee cup.

Thank you to Joellen, Pinhole Coffee's owner, for getting the order to me so quickly. Have a look at their online store (pinholecoffee.square.site) and consider giving them some support. Their coffee is excellent, the magic is real.

Seriously, It's Covid season...what the hell is there to write about?!?

Last week I shot a Kodak Brownie Hawkeye. I flipped the lens several years ago. It's been sitting on the shelf of a cottage until recently. I needed to get out of the house, so I took it for a walk...a couple of miles around the neighborhood. I focused (as best you can with an old fixed-focus camera) on fire hydrants. They're easy subjects (trite, too) since the don't complain about posing. Here's what I got. I forgot the camera has a few light leaks. I'll need to tape the seams next time.

In case you don't know, this Brownie model shoots 620 film. It's possible to use 120 on the take up reel, but you may need to bend some small metal tabs on the sides of the pick-up reel holders. It's that easy.

I planned to go with someone else. I drove up alone, opening the windows occasionally to the cold to wake myself because I'd slept so little in the weeks prior, and felt melancholy. In the higher elevations I smiled at patches of snow that fell earlier in the week but were mostly melted. It was the first snow I'd seen this season, despite being February. Every white patch brought a blizzard of happy memories, smiles that melted back into sadness.

The drive took longer than I expected, longer than Google said it would, but I welcomed the slowness.

A long bridge spanning the obscenely swollen Cumberland River greeted me at the park. It’s been a wet winter, but the speed and rage of the water shocked me. I didn’t recognize it as the same river that passes through my town, Nashville, 200 miles downstream; I'd never seen it like this, not even during the flood of 2010. Driving across that old bridge, convinced it couldn’t possibly withstand the river's onslaught, frightened me.This was Young Cumberland, still close to its birth, hot-headed, eager to rebel against constraint. Down Nashville way it's Mid-life Cumberland, meandering through its day-to-day routine, trying to slow the persistent plod toward retirement into the Ohio. Both stages can be deadly, but in very different ways.

I promised myself to use this time away to think. Thinking about youth vs. mid-life, and beyond, didn’t help my melancholy. I took a deep breath and drove across the bridge.

Just downstream of the bridge is Cumberland Falls, a 70-foot faceplant in the river’s journey west. I parked and rushed to see the fall. It’s called the Niagara of the South. It ain’t quite Niagara, but its power made me think it’s damn close. I wandered to the different overlooks, each time impressed with the fall and trying to capture it on my crappy little film cameras.

I drove up the lodge, where I’d booked a suite, and dropped my stuff in the room. I wasn’t looking forward to sleeping in a king-size bed in a king-size room on my own. I didn’t want to hang out in that vast loneliness, so I went down and sat on the lodge’s patio, feeling the cold as I watched the Cumberland Valley turn itself over to night.

My main reason for going: to see my first moonbow.

A moonbow is a rainbow created by the light of the full moon in the mist of the falls. You don’t see a rainbow in the traditional sense because your eyes can't discern the colors (unless you’re under the age of ~6…something about losing cones as you get older). Conditions must be perfect, so moonbows aren’t common but there are a few places on earth they appear with some regularity, Cumberland Falls being one of them. I advise you look up Cumberland Falls and Moonbow to see what I’m talking about.

Although naked adult eyes can’t see the colors, long exposure photos can. I hoped to capture a colorful moonbow on film (alas, I failed). I was surprised how many other people were there for the exact same thing (although I don’t think anyone else was shooting film).

One woman I met was driving from Florida to Pennsylvania; her husband filed for divorce and she was headed to stay with a cousin she’d met only once. She’d read a blurb about the Moonbow at a rest stop and decided to detour since it was a full moon weekend. She had a high-end digital SLR she didn’t know how to use despite calling herself a wedding photographer. I showed her how it worked and let her use my tripod to take several photos of the moonlit falls. She was excited and it made me happy to help her find some joy in a difficult time.

She left and I reclaimed my tripod to take my own photos, hoping to find my own joy in a difficult time.

I had someone I don't know reach out to me yesterday to offer encouragement after reading my recent posts. It was a kindhearted gesture. Thanks, you, for gifting me a much needed and appreciated boost. It reminded me, I need to be more kindhearted to strangers, it's how we improve this world.

I woke this morning to snow. Not enough to keep me in bed away from work but enough to give me a smile. Living in Nashville means snow is a rare occurrence. We're on that just-might-snow-but-probably-ain't-gonna geographic line. It's common for folks just north of us, and east of us on the Cumberland Plateau, and west of us to get lots of snow each year. Could be Nashville is hot enough, urban enough, bad ass enough to repel the snow angels.

Snow is joy, laughter, happiness, and all that cheese. Maybe the brightness created by reflecting light serves as a fleeting panacea for seasonal affective disorder. Maybe I still remember sledding as a child, then as an teen, then as an adult, then as an adult with child. Maybe because of its rarity, although rarity does not translate to happiness...I mean the plague is rare...so maybe that's not it.

After our last big snow, the kind that shuts down Nashville for a week -- meaning more than a couple of inches -- I reverted to being a child for a few days. I bundled and trundled my ass to a nearby friend's manor. We drank and cooked and smoked and sledded a small hill.

This morning when I woke up and looked out the window at less than an inch of snow knowing I had to get to work and wishing I didn't, that memory gave me a smile. Thanks, Nature, for gifting me a much needed and appreciated boost.

Here's video of sledding a small hill in 2016. I wish I could Groundhog Day that snowstorm endlessly.